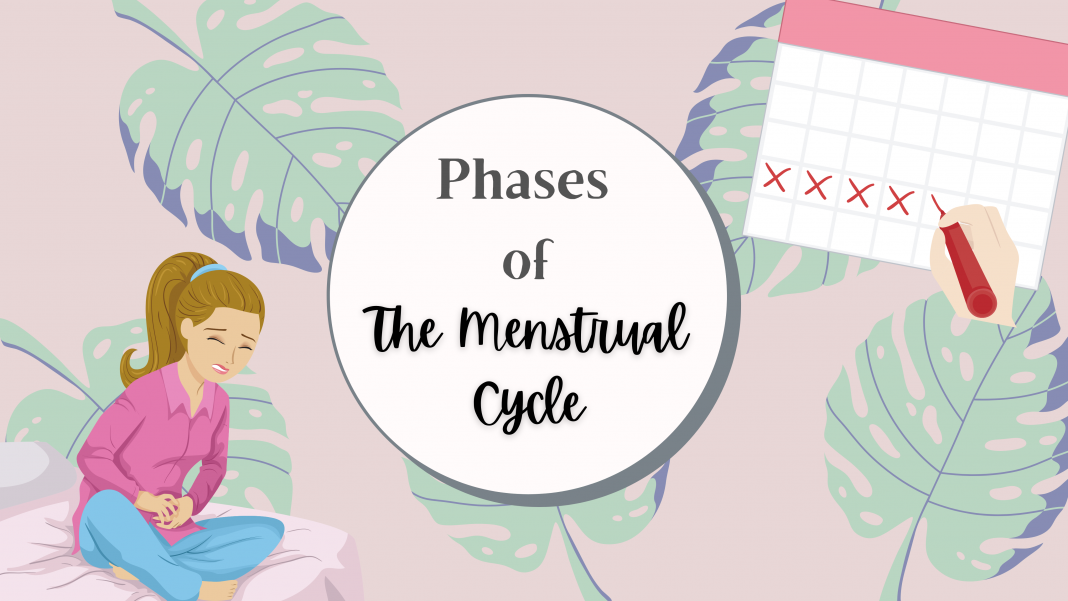 In this article we will be talking about Phases of menstrual cycle and the effects hormones have on the ovaries and the uterus during these phases.

When you hear the term menstrual cycle, I’m sure the first thing that comes to your mind is blood, or PMS, or the unusual breakdown you had the other day over favorite TV series ending. For most people, the menstrual cycle is just about “that time of the month” and only about the blood coming out of the vagina.

It’s just an indication that you (or your partner) are not pregnant and that is okay. Sometimes, that is all you need to know but for some people, knowing more about the menstrual cycle is very crucial- for example, a couple actively trying to conceive, and a couple actively trying not to, or someone just trying to come up with a date for a vacation.
As unrelated as it might seem, the menstrual cycle affects our fellow uterus owners and the people around them more than you think.

This phase of the menstrual cycle ideally lasts up to 14 days. It starts on day 1 of the period and goes up to ovulation. The menstrual period, or the menstrual phase where the bleeding occurs, can last up to 7 days. Before ovulation, there are some events that the uterus and the ovaries undergo in order to prepare for ovulation. The ovarian follicles mature to release an egg, also called the ovum. Hormones including LH, FSH, and estrogen get released and surge by the end of this phase right before ovulation.

EVENTS IN THE OVARY

This phase of the menstrual cycle usually lasts up to 13 days but can go up to being 22 days long as well, depending upon person-to-person.
The follicular phase is named the pituitary gland, a small present on the base of the brain (also known as the master gland), decides to produce a hormone called the Follicular Stimulating Hormone (FSH).

EVENTS IN THE UTERUS

Just as the ovaries undergo the follicular phase, there is a whole different story going on in the uterus. The menstrual phase can last up to 3-8 days depending upon person to person. This is the phase where the bleeding occurs (Yes, your period is just “one” phase of your cycle. Shocking, right?). The day when the first drop of blood trickles down your vagina is called day 1 of your menstrual cycle. The uterine lining that built up during the previous cycle breaks down and is released through the vagina mixed with blood. You might feel some mild symptoms similar to PMS during this period.

Cervix- During this phase, the cervix is firm and situated low. It is partially opened to allow the flow of menstrual discharge.

This phase begins from the end of menstruation and lasts up to ovulation. In this phase of menstrual cycle, the uterine tissue builds up in the preparation of a possible pregnancy. The uterus builds up the endometrial lining as a response to the estrogen being released by the follicles. The endometrium is where the zygote (fertilized egg formed by the fusion of sperm and egg) gets implanted in case fertilization occurs. The endometrium is the thinnest at the beginning of this phase and thickens as it proceeds to ovulation.

Cervix- After the menstrual phase, the cervix is high and firm as the egg has not been released yet. Also, since there is no discharge, it is completely closed.

Ovulation is the event of an egg being released due to the rupturing of the mature Graafian follicle as the hormone levels surge. The egg is released as a consequence of the increased levels of LH, FSH, and estrogen.

The egg is released into the oviducts where fertilization is supposed to take place. This is also known as the fertile window and the ideal time to conceive. This egg survives for 24 hours.

You might even feel a higher sex drive around this time. If you wish to conceive (or in simpler words, get pregnant!), this is the perfect time to get under the sheets with your partner! This phase is 2-3 days long. The estrogen and testosterone levels are at their peak. At this point of the cycle, you might feel good about your appearance and even more confident.

Cervix- During ovulation, the cervix needs to allow the sperm to enter for pregnancy to occur. However, it is still positioned high and is firm.

These events take place after ovulation and last up to the day before the beginning of the next cycle. This phase witnessed the rising levels of progesterone. The unfertilized egg converts into corpus luteum as it degenerates. This is the phase where you might suffer from something called PMS. The symptoms include headaches, nausea, vomiting, abdominal cramps, tenderness in breasts, mood swings, and pain in the lower back.

EVENTS IN THE OVARY

This phase of the menstrual cycle lasts up to the day before the beginning of the next cycle. This phase begins after the egg released during ovulation begins to degenerate. This “egg” transforms into corpus luteum and now begins the production of progesterone and estrogen.

This phase witnessed the rise of progesterone levels that peak as it reaches the middle of the phase.
This progesterone also helps in supporting pregnancy in case the egg gets fertilized. Chances of pregnancy are high during this time but not as high as the ovulatory phase.

The corpus luteum breaks down around day 9 to day 11. The levels of progesterone and estrogen drop by the end of this phase thus triggering a period or the menstrual phase of the next cycle. You might feel symptoms of PMS such as headaches, mood swings, nausea, sore nipples, bloating, etc. around this time.

EVENTS IN THE UTERUS

During this phase, the endometrial lining prepares to break down in case there is no pregnancy. The rising levels of progesterone act as a signal for the endometrium to stop thickening and prepare for potential implantation of a zygote.

Another type of hormone called prostaglandins is also releases during the late secretory phase. The two prostaglandins released are called PGE1 and PGF2α.

These are associated with the drop in estrogen levels that occurs before the menstrual phase of the next cycle. These prostaglandins peak twice in each cycle; during the preovulatory phase and during the late secretory phase. Prostaglandins are released by the endometrium, causing changes in the nearby cells.

Prostaglandins are also known to affect ovarian steroidal hormones and cause dysmenorrhea- that is, menstrual cramps. PGF2α is responsible for constricting the endometrial blood vessels during menstruation and causes contraction in the myometrial smooth muscle.

Other than that, they also come into play during the preovulatory phase and in the induction of labor pains.

Cervix- In this phase, the cervix is firm and positioned low, but is closed and will only open in the next menstrual phase. 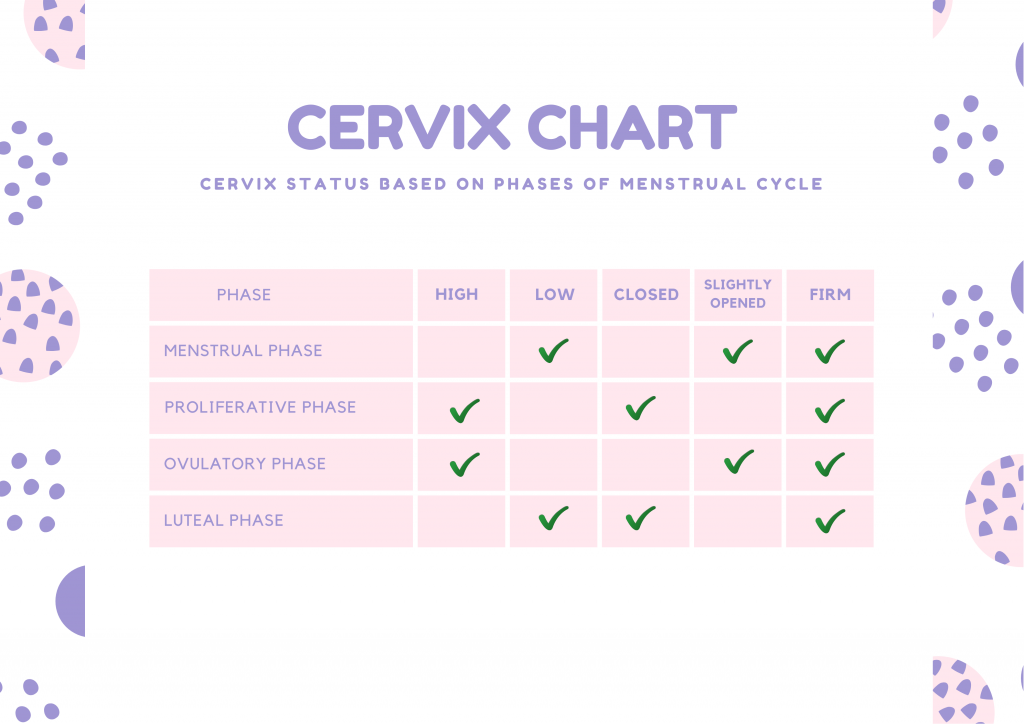 What to do with this information?

Knowing the phases of the menstrual cycle can be very beneficial. You can either download a tracker app or simply write things down in your notebook or maintain a spreadsheet to track your cycle. Once you start doing so, you will notice a pattern and learn new and exciting things about your body.

Some people even believe that tracking their cycles somehow made them feel more connected to their bodies. You don’t necessarily have to do it for the same reasons unless of course, you want to.

Tracking your cycle can help you if you want to get pregnant, or when you don’t, or you could use its prediction while planning a trip! If you are not someone who menstruates, you can track the cycle of someone who does (with their permission of course). It could be your romantic partner or another close one. You can learn as you do it as long as they are comfortable.

If you liked ‘Phases of the Menstrual Cycle’ also read 7 Tips for maintaining good menstrual hygiene for your period.

Also, connect with us on Facebook to keep up with us!

The Menstrual Cycle 101- How your period works